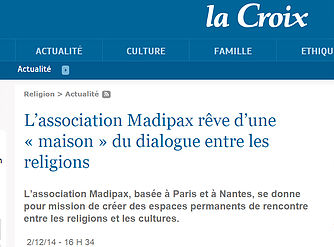 The Madipax association, based in Paris and in Nantes, gives for mission to create permanent spaces of meeting between the religions and the cultures.

Before investing a physical place, the association is going to make at first live these exchanges through concrete actions.

” There are in France any sorts of houses?: of health, associations, labor unions, wines … But not still of house of the dialogue and the peace “, notices Jacques Hubert, president of the association Madipax, based in Paris and in Nantes.

Giving for objective to succeed, one day, in building a place which can shelter a library, meeting rooms, even prayer, the association already strives to create new spaces of meetings between people of any ages, any religions and any philosophic conceptions.

” Considering the ambient climate of tension, it is more than ever necessary to build an intercultural hope “, asserts Jacques Hubert, also founding of the association of interreligious dialogue Tibhirine, born in Nantes in 1996 in reference to seven Christian monks murdered this year in Algeria.

NOBODY SPEAKS THESE INITIATIVES WHICH MAKE NEVERTHELESS OF THE SOCIAL LINK

Noticing that the meetings between the religions and the philosophies often take place in the shade and without sufficient ways, he hopes to make of this association a tool of structuring of the dialogue almost everywhere in France. ” We know that there are actions in Nantes, Marseille or Bordeaux, that Catholics and freemasons meet for years in Limoges, but nobody speaks these initiatives which make nevertheless of the social link. “

To put the foundations of this house, Madipax plans to organize a journey of eight days in Algeria in spring, 2015, gathering about fifty participants of any ages, any cultures and any religions. ” The idea, it is to go together near the desert to find the sources of the brotherhood “, specifies Jacques Hubert, who plans to surround himself with ” spiritual very diverse guides ” to bring to a successful conclusion this mission (bishop of Constantine, imam of Bordeaux, agnostic person, etc.).

THE DIALOGUE BETWEEN ALL THE TRADITIONS BECAME VITAL

The artist of Nantes Farid Abdelkrim, of Muslim faith, who subjected the idea of this journey, will in particular make discover the village of his ancestors, El-Kantara. “The dialogue between all the traditions became vital, he estimates. If we think of each to hold all the truth, we shall never move forward.” He also begins, within the framework of Madipax, a tour of his funny show on the Islam, The Way of the station, followed every time of a debate.Other concrete initiative, to organize a meal as a vector of meeting between the cultures. This one could, for example, be held in the abbey of Fontevraud (Maine-et-Loire), which has already welcomed a colloquium on the interreligious dialogue supported by the region. “We think of inviting big bosses of different cultures and of organizing Round Tables around the meal”, explains Jacques Hubert, wishing that this action can be then duplicated somewhere else in France.

To multiply these initiatives would also allow to develop the position of public authorities on the secularism, which is lacking opening and modernity “, underlines Jean-Marc Forge, vice-president of Madipax, who says to himself to agnostic.